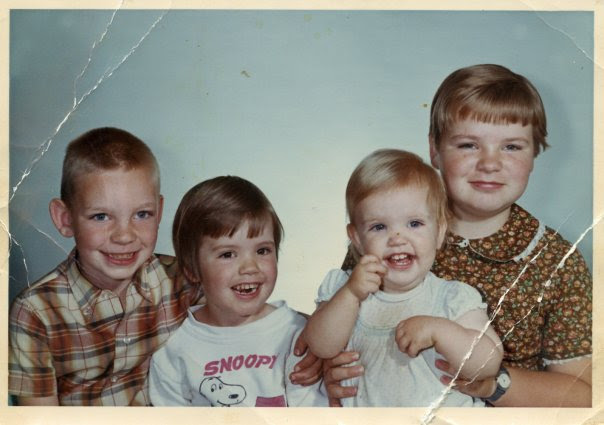 I used to daydream about saving my sister Elaina. The scenarios were quite simple, I would contact Richard Simmons, and he would knock on her door and become her personal weight loss guru. Or I would move to Kansas, and do it myself. It always seemed like it would be so easy, and the feeling I had in my heart and stomach whenever I thought of these things was so positive. But my family was in denial, especially my mom, so even mentioning Elaina’s ‘problem’ was taboo. So I did nothing, I said nothing, and it will be a regret I carry with me the rest of my life.

Elaina was my big sister. She was what advertisers in the ‘50’s liked to call chubby. Most people had trouble seeing past her weight, though if you could see past it, you knew you were dealing with an extraordinarily bright and funny person. Elaina was who I called when I was having a bad day. The last time I talked to her was on my 40th birthday, and it wasn’t a good day. I cried during the entire conversation, pouring out my frustrations and concerns. I don’t think I ever asked her how she was doing. I know if I had asked, she would have said she was fine. She always said she was fine.

She moved to Wichita, Kansas when I was thirteen. After high school, she struggled to find a job. I think my dad stressed about it, knowing she was probably having a difficult time, so he found her one. My Aunt Marty ran an insurance office in Wichita and they were looking to hire a clerk. So my Dad bought Elaina a one-way ticket, and she lived there until the day she died in September of 2004. She was 45 years old, the death certificate listed cause of death as complications from morbid obesity.

It was gray and rainy the day I found out. The rain had washed away the late summer dust; everything was so vivid and green. There were so many things going through my mind, the words of her friend who called: she fell in the bathroom, was there for twenty-four hours, the ambulance came, she refused help, died in her chair sometime in the night. With those images swirling through my head, it took a while for me to realize something very important, but when I did, the wave of dread poured down on me like hot oil. I would have to be the one that told my family.

Every year my parents and my brother Steve journey to Seattle and stay with my other sister Mary and attend a Mariners baseball game. This was their weekend. That is why my sister’s friend Debi called me because nobody was at my parent’s house, and I was the only other phone number in Elaina’s address book. Having to tell my dad was probably the hardest thing I have ever had to do in my life. As I told dad what I knew, Mary told mom and Steve because I started hearing my mom sobbing for Elaina through the phone. It is a sound that haunts me to this day. That was the day I officially became an adult.

When the stars align and the world reaches perfect synchronicity, everything will fall into place. This is what happened the following week and it was magical for my family. Strangers went out of their way to show sympathy, not with platitudes, but with their actions. We saw the most positive sides of humanity you could ever hope for. An example, I was flying to Wichita alone the following week and making a transfer in Phoenix. I was looking forward to meeting up with my family later that night, and at the same time highly distracted by the waves of emotion that would all of the sudden be there. If you have ever travelled through Sky Harbor International, you know that the concourses are long and confusing. I was trying to find my gate number on my boarding pass when somebody said to me “if you are going to Wichita, you’re at the right place.” I looked up at the person talking to me. I looked up, and up and up! I was stunned. Standing in front of me was the largest person I have ever seen. He was 7’ 4”, weighed 450 pounds, and a professional wrestler for the WWE. He put out his dinner plate hand to shake mine and introduced himself as Paul. I just stood there staring.

He said, “Are you going to Wichita for business or pleasure?” “My sister died” was all I could say.

All of the sudden, his arms were around me in a big hug. It was the most natural thing for him to do. And then he walked away. I stood there speechless.

A little boy about nine years old is tugging on my sleeve, looking at me in awe. “You know The Big Show?”

I was confused, I didn’t know who The Big Show was, but quickly made the connection to what he was saying. “No, he’s just a really nice person.” When I got to Wichita, my sister Mary was waiting for me. I was telling her about my experience in Phoenix and her eyes grow large and her jaw drops. “He’s coming down the escalator, isn’t he?” I ask. She nods. I turn around and realize that he is walking towards us. I introduce my sister, “Paul, this is Mary. Mary, this is Paul.” They shake hands. He gives us his deepest sympathy, turns and walks away. It was countless measures like this that helped to soften the impact of our loss.

Elaina had lived at an apartment complex in the “not so nice” part of Wichita. Her neighbors and friends were people who live on the fringe of society: gays, lesbians, transgender, and immigrants. It was like she lived on the island of misfit toys. As we packed her apartment, people would drop by and tell us stories about her kindness and caring to others. Skylar was a young gay man who had been kicked out of his family’s home when he came out. He lived in a small studio apartment two doors down from Elaina. He would help her out a couple of times a week with cleaning and groceries as she started having more and more trouble getting out. He was the one who found her in the bathroom and called 911. Debi, Elaina’s closest friend, ran a food bank and shelter for people dying of HIV. She told us how Elaina volunteered at the shelter and when somebody died, she would sew them a quilt block for the AIDS quilt. Her partner Lisa managed the hospice program at a local hospital. I noticed that she spoke with all of us individually and as a group. The gift she gave that day to her friend Elaina was taking care of us, her family.

Debi arranged the memorial service to be held in the conference room of the food bank. Saturday was a beautiful day, the sun was shining, and the temperature was perfect. It turns out that autumn in Kansas isn’t that bad. Leave it to Elaina to die during the best time of the year. She really didn’t like to inconvenience anyone. The bowls of condoms in the foyer, the risqué posters on the wall and the public health safety placards through out the building couldn’t deter from the positive energy that flowed through the crowd that day. My 91 year old Mennonite aunt and uncle sat next to a transvestite who had a penchant for fur prints and bright make-up. It was a standing room crowd. Lisa led the memorial service, but instead of a long winded speech, she asked that everyone in the room share a memory they had of Elaina. With each individual story I built a new layer of understanding of who this person, my sister, Elaina was. It was a beautiful and special time for me and my family to know that she was loved by so many. On December 26 of that year, we scattered Elaina’s ashes at the Oregon Coast. It was sunny, warm and calm and it seemed like such a fitting end to a complex life.

It makes me sad, and sometimes angry that we did not try and save my sister. She did not have to die. I do not think she intended to commit suicide, but that is what she effectively did. I have always lived my life trying to have no regrets, but her passing has made me realize that things are not always that easy. It has also made me reevaluate a number of other things in my own life. After seeing the ritual of her passing, I had to ask myself would that many people say something nice about me? Have I lived my life to the fullest? Am I living up to my fullest potential? When I asked myself those difficult questions, I came up wanting. So here I am in school after a twenty-six year hiatus. Looking inside myself for the potential that is probably there, but hidden by years of neglect and possibly denial. I need my life to have meaning and purpose. It’s not going to be an easy journey. I have my own personal demons to face, and that is never easy. But I’m feeling up to the challenge. I hope for a perfect star alignment and a little synchronicity of my own.